We are continuing to monitor CDC guidance to safely serve our customers. | Learn More 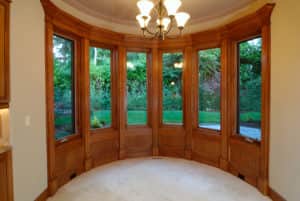 If you’re looking for a way to add architectural elegance and grandiosity to your home while simultaneously boosting curb appeal and bringing in an abundance of natural light, consider having either bay or bow windows installed. Bay and bow windows are both compound window units, meaning they are not really specific window styles themselves, but that they each feature windows of varying styles arranged in a particular way.

Bay windows typically consist of three separate windows, of which the two side windows (commonly called the “flankers”) are installed at 30-, 45-, or even 90-degree angles, while the central window is parallel to the outside wall of the home. Oftentimes, the central window is fixed — a large picture window, perhaps — but it can also be operational if you would prefer. Likewise, the flankers can be customized to accommodate your functional and aesthetic preferences, with the most common options for these windows being double-hung or casement windows. The bay window unit projects outward from the exterior wall of the home, creating its namesake semi-hexagonal “bay” on the inside. This extra space can make a smaller room feel less cramped, and, because the flankers are installed at an angle, bay windows are great for catching cross breezes.

Bow windows are kind of like cousins of bay windows in that they feature multiple windows built into a single unit. However, bow windows are like the bigger, dare we say, more attractive cousins. While a bay window unit features three separate windows, bow windows typically have four, five, six, or even more. And, while bay windows often have a fixed central window and operational flankers, all of the windows on a bow window unit are usually operational. In terms of shape, bow windows are more curved, whereas bay windows are more angular. Both provide expansive views, versatile ventilation, and ample natural light, and both can significantly boost your home’s wow factor, so ultimately, which one you choose will probably come down to personal preference or available space.

Get the Ball Rolling on Your Window Installation Project

Still not sure which replacement windows to have installed at your home? If so, then contact the pros at West Shore Home. Our product specialists will be happy to answer any questions that you may have and schedule you for a free, in-home consultation to talk about all things windows. The best part? Once you decide which windows to go with, our team can have them installed in just one day. Ready to get started? Contact us today.